Its been a while since I wrote anything for this blog. Its about time I tried getting in the habit of more frequent postings. Today's post will be a general health update.

I recently got entered into the VA health care system, and have been checking things out. I have full coverage (but no dental) so I can afford it. 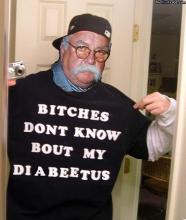 With diabetes running rampant through the family, I expected to see at least a warning that I have pre-diabetes or some such. But after taking the fasting blood test and all the other general testing, it came up totally negative. I figure its mostly because I've been better than the rest of the family at getting exercise, and also my eating habits. I was a vegetarian for 17 years, and only recently gave it up to switch to a modified paleo-ish diet to see if adding meat back in will help identify any missing nutrients.

Besides just general "getting older" sorts of issues, I've recently had two ailments, both in the left arm.

According to a few doctors, my wrist has tendinitis. The folks at the VA occupational therapy center gave me a wrist brace and some exercises to do. Both have been helping, and at the rate its getting better I figure that one can be checked off as fixed in a few weeks.

The other problem is my shoulder. The reviews are mixed, one doctor saying rotator cuff injury and the other saying a damaged tendon. The exercises have been helping, but today one of the doctors gave me a shot of Novocaine in the shoulder to see if it can make a leap in improvement.

The Not Quite So Good News

The Novocaine shot did cause a thankfully short panic attack. It seems like almost any mind or mood altering substance can trigger it. Not that I'm big into those kinds of things, but it does suck.

Also, after the visit with orthopedics today I dropped by the walk-in mental health clinic. They were too busy to see me today, so I'll have to try later. Not that there's any real rush, but the doctors want me to check in there to see if there's anything they can do for my nervous anxiety and panic attacks. I'll give them another try on my next visit, which is in early February.

So things are at least progressing on the health front. I hope to be able to start weightlifting again soon, but I still need to figure out a way to get some cardio. The stroller combined with the crappy sidewalks here preclude jogging or walking with Malcolm along for a ride, so I'll probably have to have someone else watch him in the mornings if I'm going to do that. If Shire Silver continues to grow at the pace of the last few months, I should be able to afford that in the not too distant future.